Robert BERRY is Committed to reinstate the Upper House in to stop the current dictatorship dead in its tracks. QLD is the only state that does not have a upper house, it was removed in 1922 by Labor and all Party’s have abused this dictatorial power since.

The upper house provides checks and balances where legislation is reviewed and the voters have greater power, its stops the absolute power corrupting absolutely.

As an Independent I only answer to you. Your number 1 vote for me Robert BERRY

Will go a long way to make Toowoomba South a better place for you and your family live in.

Learn how was turned into a Dictatorship and what political party was responsible.

I am committed to the reinstatement of the upper house in the QLD Parliament so that No Party has total control on legislation without it being reviewed by the upper house.

Why is the only state in without an upper house?

While the QLD Governor was absent the Premier Ted Theodore made the speaker of the house the Lt Governor and then the upper house was stacked with members of the same thinking and beyond all belief all of those members voted themselves out of office with enormous benefits that encouraged them to go.

Then and only then will we have some balance of power in the Queensland Parliament but also transparency and accountability. No more sneaky changes to legislation in the late of the night, as the Upper house is the house of review and takes away total absolute power.

Only Independents can restore the Upper House in he Major party's all want complete power when they win office which is currently keeping under a Dictatorship rule.

I will commit to return this State of back to a Free State governed by the people for the people via the reinstatement  of the Qld State upper house.

Sir John Dalberg-Acton, 8th Baronet. He is perhaps best known for the remark, 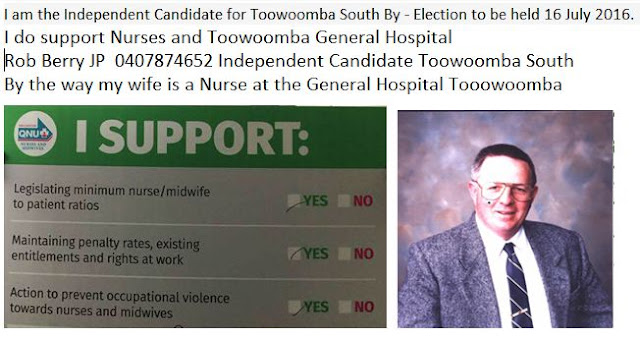 Rob Berry is the only local Candidate living in the Toowoomba South Electorate and has done so for 42 Years.

Nobody knows the wants and aspirations of the local community better than Rob BERRY.

True Independents commit to the policies of the people in the community that they represent.

They say that affordability of living is their main concern, rising rates and fees and the cost of living.

They don’t want intergenerational debt for their children because of the present undisciplined spending and it starts locally.

We must Legislate to restrict all Local Government borrowings to 20% of  their general rate income.

We need funding for additional nursing staff at  so that it can meet our community needs.

Commit to the protection of Land Care, underground water supply and farmers rights.